The European Biennial of Contemporary Art 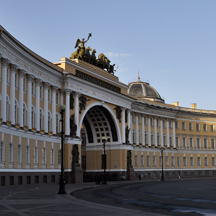 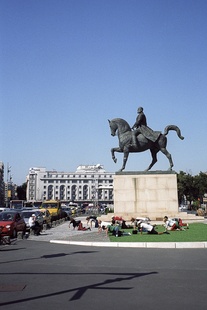 Alexandra Pirici, Soft Power - Sculptural Additions to Petersburg Monuments, 2014
Interventions on the monuments of Peter the Great, Catherin the Great, Lenin Statue at the
Finland Station
Credit of the photo: If You Don’t Want Us, We Want You, 2011. Intervention in public space,
Bucharest. Courtesy of the artist.

Alexandra Pirici’s projects charmingly challenge the politics of remembrance and the ontology of city monuments. In her native Bucharest she has replicated the equestrian statue of Carol I and has choreographically rebuilt Ceausescu’s Palace, the seat of the Romanian Parliament. Pirici sculptural performances in St. Petersburg with the statues of the Bronze Horseman, Catherine the Great and Lenin at the Finland Station — aim to recontextualize and disarm the silent and stark monumentality of the places and their embedded historical readings. Pirici plays on the “human scale” readings of commemorative and poignant sites and on their past and current ideologies.

Alexandra Pirici represented Romania together with Manuel Pelmuş at the fifty-fifth Venice Biennale with the acclaimed project An Immaterial Retrospective of the Venice Biennale, in which artworks exhibited within the biennale and events related to it were enacted by a group of performers for the whole duration of the biennial. Pirici has a background in choreography and the performing arts but works across different media, including film and music. Her work has been presented at Hebbel am Ufer, Berlin; Bass Museum of Art - Miami, Centre Pompidou; and GfZK Leipzig, among others.